Week 3: Living Beneath the Bell Jar of Depression

As our discussion about Sylvia Plath’s The Bell Jar and mental illness more broadly was beginning to wrap up, I asked the class if anyone had any last ideas or thoughts that they wanted to discuss pertaining to the novel. One student raised her hand and said that she just wanted to share a favorite line from the novel. We turned to the page and talked about it, and then I realized that there were a number of places in the text that these students just wanted to share. Our discussion continued as we marveled at Plath’s grasp of language.

Sometimes, I think, discussions can work better when they escape the confinements of preparation.

The Closing of the Bell Jar

While the first half of The Bell Jar introduces the reader to the character of Esther and the world she inhabits, the second half truly allows the reader to witness firsthand how Esther’s mind unravels as depression takes its toll on her. Esther meets Dr. Gordon, who insists on administering shock therapy when talking results in no improvements. The experience of shock therapy feels like slumber when done correctly, but Esther’s consciousness during parts of the shock therapy leaves her traumatized despite her external appearance of recovery.

Life goes on, but Esther’s depression lingers as she is consumed by suicidal thoughts. She contemplates and half-plans a variety of attempts: cutting herself in the bathtub with a razor blade, drowning in the depths of the sea, hanging herself with her mother’s bathrobe drawstring. She becomes aware of her body’s physiological desire to live, and its resistance to her suicide attempts. Finally, she finds her answer in her mother’s sleeping pills, and she overdoses within the comfortable confines of the cellar.

Miraculously, her groans give away her hiding spot and Esther’s mother finds her. She is initially admitted to the state hospital, but her sponsor Philomena Guinea has her transferred to a better private hospital. While taking insulin injections, Esther spends time with Valerie and Miss Norris before Joan, the girl that Buddy once took to a school dance, is admitted as well. She establishes a good relationship with Dr. Nolan, and gets moved up to Belsize with Joan, the final step before she reenters the real world. Although Dr. Nolan had initially assured her that she would not have to receive any more shock treatment, Dr. Nolan stands by Esther’s side and makes sure that it is done properly.

As winter semester draws nearer, Esther seems to be doing better. She gets fitted for birth control and loses her virginity to a professor named Irwin, but she feels pain rather than pleasure and bleeds tremendously. Joan helps her to the hospital, but this emergency seems to traumatize Joan for she hangs herself just a few days after. The novel draws abruptly to a close, just as Esther enters into a room full of doctors to demonstrate her readiness for restitution.

Although I knew that this was a book about mental illness, the intensity of Plath’s writing and the pain of experiencing Esther’s suicidal thoughts took me aback. My experiences of reading the novel in many ways seemed to parallel Esther’s experiences of coping with mental illness as embodied by the metaphor of the bell jar. There were times, particularly as she described her elaborate suicide schemes, where I felt as though a bell jar was enclosing around me. I was overwhelmed by the naked honesty and bold vulnerability of Esther (or Plath, if interpreted autobiographically) as she exposed her mind in such an unhindered way. Interspersed amongst these painful passages of depression were moments when Esther was doing better, and it was at these times that her personality shined through, other aspects of her character came to life, and I could feel the bell jar lift from around me. This speaks to Plath’s incredible success at capturing her experiences and illuminating mental illness by carefully crafting language.

Fifty years ago today, Sylvia Plath locked all the doors. She kept her children safely in the next room, using towels to seal the empty spaces that still connected her to them. She turned on the gas stove. She reached her head into the darkness, breathing deeply. Exhaling life, inhaling death.

Until about a week ago, Sylvia Plath was just a name to me, a famous poet who’s tragedy I had forgotten. Now, I can’t stop thinking about her. Learning about the kind of person she was, the struggles that she faced, the ways she thought, has in many ways changed my own thoughts. There’s something about her and about her tragic, eery story that has granted her a sense of immortality.

I remember reading Plath’s poem Daddy in high school. I don’t remember when, I don’t remember the class or the teacher, I don’t even remember what we discussed. But I remember her voice. Rereading the poem, I can still hear Plath’s voice, the rise and fall of her words as they tumble off her tongue, her sharp pronunciation of words like daddy.

Plath’s ambitious love for language. Her persistent drive despite publication rejections. Her internal challenges with mental illness. The highs and the lows of her marriage to Ted Hughes. Her suicide, both her attempts and her success. The cascade of suicides that followed in suit over the years– Hughes’ second wife, who followed Plath’s methods; Nicholas Hughes, her son. I am both intrigued and torn by the mystery of Plath’s life. I’ll be discussing my thoughts and admirations of The Bell Jar, a somewhat autobiographical account of her experiences with mental illness,  later this week. .

I am honoring her life today, on the day that she that she ended it. 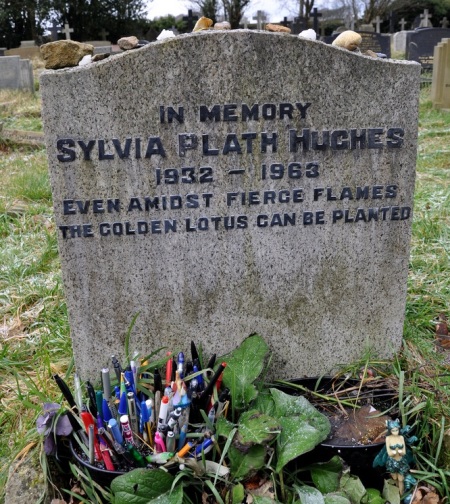 Entering the Mind of Esther: Plath’s The Bell Jar

In Sylvia Plath’s The Bell Jar, the reader enters into the mind of Esther Greenwood, an Honors English student who works in fashion and an aspiring poet studying in New York. Living in the Amazon hotel with other college girls, she has many adventures from going out with Doreen to getting food poisoning from a food tasting event. Esther is a hard worker who has no dreams of getting married, and she enjoys going out on dates and meeting men with unique names.

We learn about Buddy Wilkins, the man who was once her love interest; now that he loves her in return, she has unearthed his flaws of hypocrisy and is no longer interested. Their relationship grows as Buddy introduces her to the life of a medical student and she exposes him to the world of poetry. He admits to her that he has known one other woman, and this knowledge makes Esther feel inexperienced and uncomfortable with his innocent façade. Illness brings their accelerating relationship to a halt: Buddy has TB and is sent to a clinic in the mountains.

When Esther accompanies his father to go visit him, Buddy proposes to her. Esther denies him, claiming that marriage is not her plan and using her neuroticism as a scapegoat. Buddy, however, insists persistently in being with her, and the conversation lingers. He takes her skiing for the first time and she breaks her leg.

Time jumps forward, and Esther is heading home for the summer, eagerly awaiting her acceptance into a summer writing program at Boston. She had been confident and expectant about the course, and the news that she has been rejected is earth shattering to her. She is trapped at home, and she struggles to escape the tragedies of her situation by fantasizing about the future. Things take their toll on her, and her inability to sleep or read leads her to the family doctor; she refers Esther to a psychiatrist.

1.     How does the disjointed dimension of time illuminate the narrator, Esther?

2.     Through the juxtaposition of Esther’s passion for poetry and Buddy’s interest in medicine, what does Plath reveal about the intersection of these fields?

3.     How do metaphors and similes function in this narrative? How do they enhance or complicate the reader’s understanding?